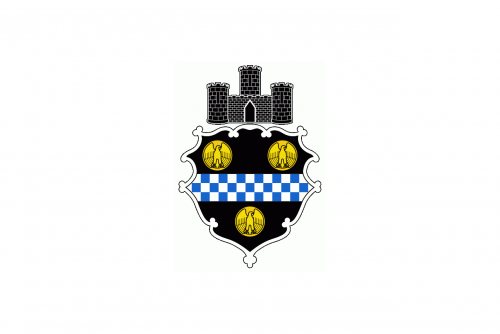 Pittsburgh Pirates was the initial name of one of the most famous American football franchises, Pittsburgh Steelers. The team was established in 1933 and played un-der their original name for the first seven years.

Pittsburgh Pirates period is the most important and significant in the history of to-day’s popular Pittsburgh Steelers franchise. The team played under its original name for the first 6 years of its history and had an ornate and a pretty patriotic logo as the official one.

The logo, designed in 1933, repeated the City of Pittsburgh coat of arms and was composed of a black shield in an ornate framing, with an old castle wall above it.

The black shield was horizontally divided into two parts. The separating like was a wide blue and white line with a checkered pattern.

It was a traditional and pretty simple logo for the team, which reflected their value of legacy, heritage and roots, and their loyalty and patriotism.

During the time, when the team played under their original name, not a single NFL team had a logo on their helmets, however, the Pirates’ design was bright and recognizable — a yellow leather helmet with black stripes on the bottom part, which was later turned into a plain solid yellow with no additional details.