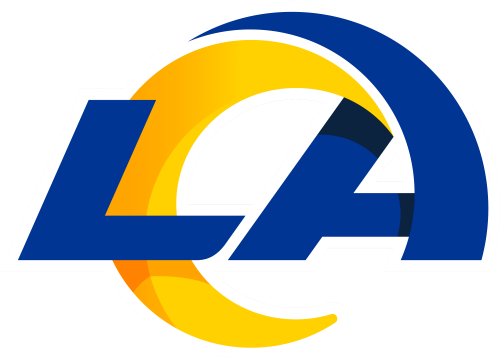 Los Angeles Rams are a rugby franchise from the West Division of NFL. The team was established in 1936 in Ohio and moved to California in 1946. The franchise is known to be the first-ever to start playing in Los Angeles. Today is it owned by Stan Kroenke and the head coach of the team is Sean McVay.

The LA Rams are the team with an interesting history. Founded in Cleveland, Ohio, they soon moved to California, which became their true home. After playing for Los Angeles for several decades, the team then moved to St Louis, but only to come back to LA again. Besides several relocations, there is one more interesting fact about the Rams — it was the first team in the National Football League to start placing their emblem on the helmets. The first logo appeared on the leather helm in 1948 and has never left it again.

The initial logo for the Rams was designed when the team was based in Cleveland. And of course, it was connected to the animal the team was named after. The rams head, which was very detailed. The animal was drawn in white and blue, with the main accent on its horns. The head was turned to the right.

In 1944 the rams head changed its direction and color palette. The black color was added and the image became more modern and sleek. Now the horns were white while the animal’s face was half blue.

In 1946 the team moves to Los Angeles, but their logo remains untouched for the nearest four years. The iconic rams head is still executed in white, blue, and black.

The contours and color palette are being changed in 1951. Now the emblem is ex-ecuted in white, yellow and black. The golden horns make the main element of the image, reflecting authority and excellence.

In 1970 the head turns to the right again and the image becomes monochrome — white head with horns in a black outline. This was the last detailed version of the logo in the team’s history.

In 1983 the detailed image of the animal’s head was replaced by a stylized yellow horn placed on a blue helmet with a small blue grill. It was a modern and bright logo, which became popular and instantly recognizable really fast.

The contours of the horns were modified in 1989, along with the helmet’s grill, which became more solid. Now the team’s logo looked more professional and powerful, staying bright and stylish.

After the team’s relocation to St. Louis, the logo is being redesigned again. It was something new and completely different from all the previous versions — the wordmark, composed of bold blue letters in a yellow outline, with a thin elegant arch above it and the “St Louis” inscription in small letters.

In 2000 the team gets a contemporary logo, which celebrates its heritage and roots. The rams head is back but in a modern interpretation. Now the animal is shown in profile and executed in a dark blue and calm gold color palette. During the same time period one more logo was designed — the elegant blue letter “R” with the curved tail, resembling the horn, was placed on a calm blue background.

The Rams come back to LA in 2016. The logo with the animal’s head remains almost untouched, only the gold color is replaced by a darker, more brown shade. And, of course, the wordmark is changed from “St. Louis” to “Los Angeles”.

In 2017 the team goes more minimalist, by replacing the brown shade with a simple white. The blue and white combination makes the image cleaned and evokes a sense of professionalism and determination. The wordmark logo has also simplified its palette.

The completely new concept was created for The LA Rams in 2020. The “LA” mon-ogram with the curved tail of the letter “A” in yellow and white, resembling the iconic horn, is now the official logo of the famous rugby team. The blue, white, and yellow color palette is back and looks strong and bright, representing the team’s spirit and character. 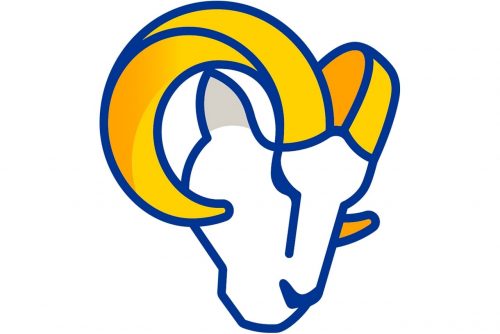 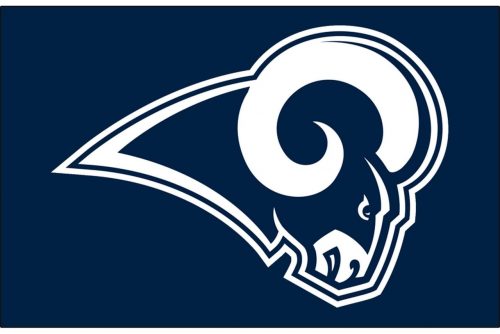 Until 2020 the one and only symbol of the team has been the ram head and its ornate unique horns. And even today, with the contemporary monogram visual identity the horns can still be seen. 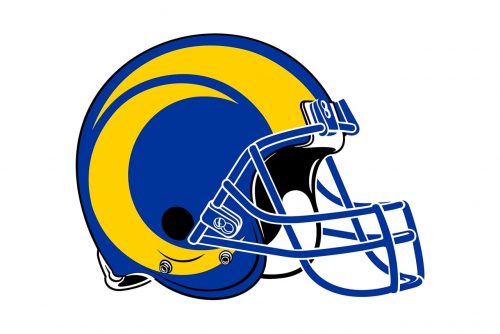 The team still uses the design from 1948 for their helmets — a golden-yellow mas-sive horns are placed on the sides of a blue helmet with the grill of the same color. This is one of the most recognizable designs in the history of American football. 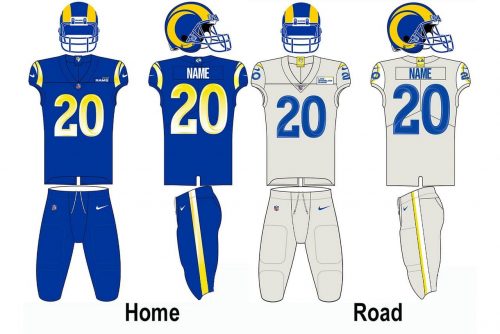 There are two different styles of The LA Rams uniforms — the home and road ones. For the home games, the team wears blue jerseys with yellow accents and numbers and the pants of the same color, while the road uniform is executed in light milk color with blue decorative elements.