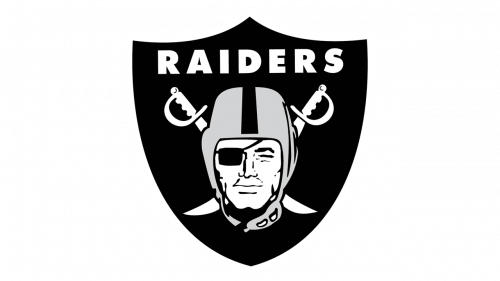 Los Angeles Raiders was the name of the today-famous Las Vegas Raiders, which was based in LA, California from 1982 until 1994 after the team moved from their initial base in Oakland.

During its twelve years of history, the Los Angeles Raiders used only one logo, which was based on the logo of Oakland Raiders, and after became the basis for the Las Vegas visual identity design.

Created in 1982, the logo was composed of a black shield with a pointed top and an image of a modern pirate with an eye-band. The pirate was wearing a leather rugby helmet in gray with a thick black line in the middle. Two crossed white savers were also on the background, adding even more “pirate” mood to the logo.

The “Raiders” inscription in all capitals was drawn in white and placed in the upper part of the shield. 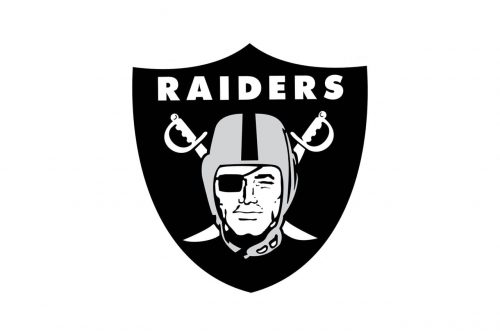 The raider, or pirate in a leather helmet, has been the team’s emblem like forever. The monochrome and gray color palette make it look timeless and strong, evoking a sense of power, professionalism, and confidence. The pirate in a rugby uniform has become one of the most recognizable symbols of American football franchises in the world.

The helmet’s design of the Los Angeles Raiders repeated the color palette and style of the main logo. The helmet was colored light gray, having a bright mono-chrome emblem on the side and a thick black line in the middle, just like the one the pirate had. 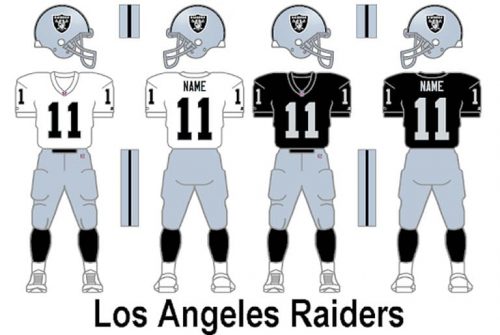 The Raiders’ uniform was also executed in the black and gray color palette. For the home games, the team wore black jerseys with gray numbers and decorative ele-ments, and solid gray pants with black side stripes.

As for the road uniforms, they consisted of white jerseys with black numbers and the same gray pants with black stripes.