Jacksonville Jaguars are one of the franchises of the South Division of NFL, which was established in 1993 in Florida. Since 2011, the club is owned by Shahid Khan and has Doug Marrone as the head coach. The Jaguars won two championships at the beginning of their career, and another one in 2017.

The Jaguars’ visual identity history is pretty short, but has one interesting fact — there was an initial emblem designed for the team in 1993, but it has never been used, because of the strong resemblance with the logo of a famous automobile brand. It was a leaping wild cat in gold and black.

In order to reflect the name of the team and not to be confused with the automaker, Jaguars start using their new logo in 1995 — the head of the animal in gold, black and turquoise blue. The blue tongue of a jaguar made the logo look unique and recognizable.

After the team got the new owner, Shahid Khan decides to renew the visual identity in order to accent the Nee Era for Jaguars. The color palette and the concept remained the same, but the contours and shape of the jaguar’s head were modified. The eyes and nose of the animal are now also colored blue, and more white accents were added to the image.

The color palette of the rugby team logo is a representation of reliability, stability, and confidence, while the jaguar itself reflects courage, speed, and even danger of the Jacksonville Jaguars. 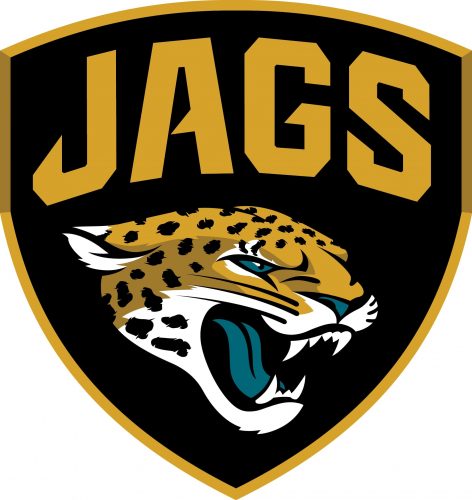 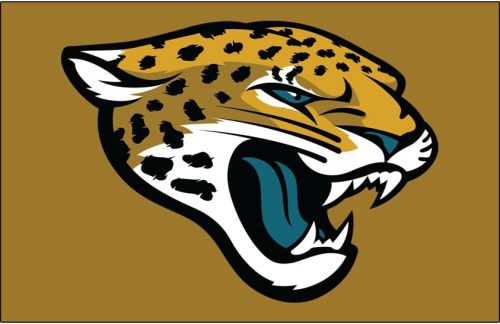 Jaguar has been a symbol of the team since its establishment. Today it is usually placed on a black, turquoise, or gold background, for better contrast and brightness. This wild cat is considered to be one of the most elegant and dangerous animals, and the choice of the team is more than understandable — it is a brilliant reflection of their values and play style. 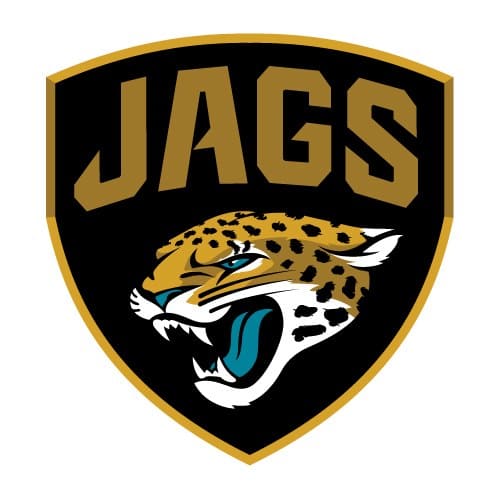 In addition to the main logo, the team also uses an emblem with the jaguar’s head on it. It is a black shield with a dark gold outline and a bold “Jags” inscription in capitals drawn in the same color as the framing. The lettering is executed in a custom typeface with sharp and thin serifs, resembling the claws and fangs of the wild cat. 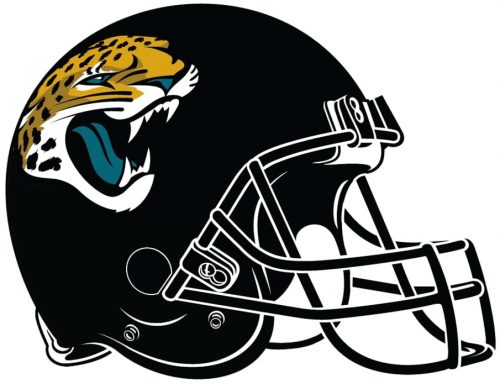 Until 2018 the team’s helmets were instantly recognizable due to their gradient gold-black color, but the Jaguars decided to go more minimalist, and today the gold-black-turquoise animal head is placed on a plain black background. As for the grill, it is also executed in black, in order to make them look even more solid and powerful. 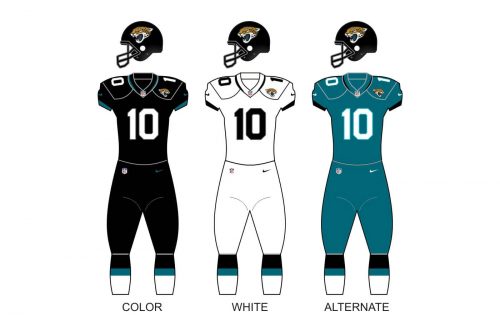 The current uniform of Jacksonville Jaguars was designed in 2013 and is composed of a black jersey and pants with turquoise side stripes and shoulder details and a white player’s number. For the road uniforms, the team wears a white outfit with turquoise numbers and black details. The simplicity of the uniform is perfectly balanced by a powerful helmet with an enlarged emblem on it.