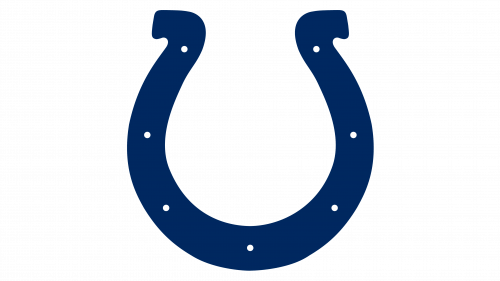 Indianapolis Colts are one of the teams from the South Division of NFL, which was established in 1953 in Baltimore and moved to their current location in the 1980s. Today the team is owned by Jim Irsay with Frank Reich as the head coach.

The history of the Colts’ visual identity can be divided into two periods — the Baltimore one, which starts in 1953 and lasts until the beginning of the 1980s, and the Indianapolis, from 1984 until today. Though the color palette we all know today is kept since the initial logo of 1953, the style and composition have undergone some serious changes throughout the years.

The horse, jumping over an obstacle — this is what the initial logo was depicting. Designed in 1953 for Baltimore Colts, the logo also comprised a bold inscription with the team name, written in light gray capitals of a custom sans-serif typeface. The main color scheme of the original version was royal blue and white, with a slightly shaded wordmark. The horse was wearing a white rugby helmet and holding a blue rugby ball, representing the sport and grace.

In 1961 the style of the logo became more minimalist — only the horse remained. The most significant change was made to the horse’s helmet — the blue hot shoe was added to its design. The football became plain white with a blue contour, and the lines of the horse were redrawn in a more confident way.

The horseshoe becomes the main hero of the team’s visual identity in 1979. It was the prototype of today’s logo, executed in bright blue with seven white dots, symbolizing grommets, on it. The emblem became an inevitable part of the Colts’ logo, and besides being a part of the horse theme, it started in 1953, it is also a symbol of good luck.

After relocation to Indianapolis, the team changed its name, but not the logo. The color palette and style remained the same, just the contours of the horseshoe were slightly modified, in order to make it look more elegant.

The logo was refined again in 2002. The main team’s color has been changed to a calmer shade of blue, which looks more “expensive” and evokes a sense of professionalism and reliability. The white grommets are now more visible, and the horseshoe itself became more elegant and smooth.

Though the team still uses the logo from 2002 as their official one, in 2020 two additional emblems were created. They both repeat the color palette and style of the main version, though it can be used in different materials for better recognizability if Indianapolis Colts. The text logotype has been redrawn in a new unique typeface with smooth and thick serifs. The letter “L” of the inscription reminds of a horse rider’s boot, making the whole visual identity balanced and complete. 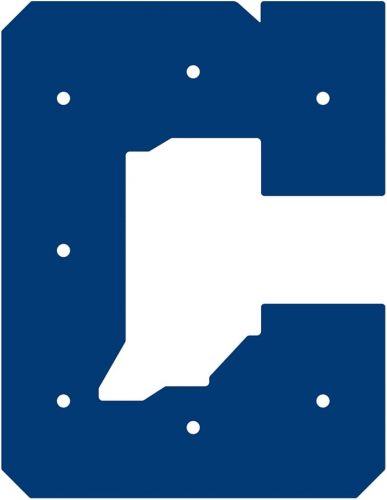 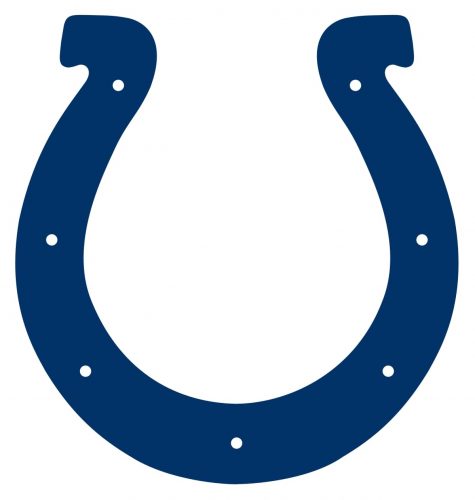 Besides the iconic blue horseshoe, another emblem designed in 2020 depicts a stylized letter “C”, which resembles the official logo, but is placed horizontally. The inner part of the letter repeats the contours of Indiana, the home state of the team. And, of course, seven white grommets are also here. 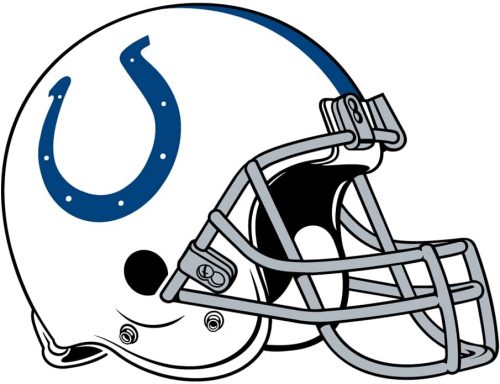 The style of the Indianapolis Colts’ helmets was designed in 1961, as a part of the official logo. A white helmet with a blue horseshoe image on the side is complemented by a blue stripe coming through the central part. Throughout the years only the shape of the helmet and the color of the grill were being changed, but since 2004 the grill is colored in light gray, which looks strong and adds a sense of confidence. 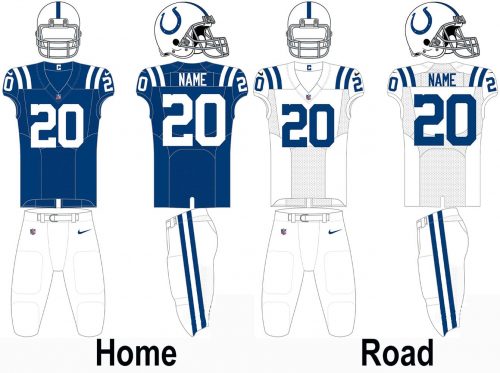 The uniform of the team is also executed in a white and blue color palette. The team wears blue jerseys with white details and numbers, and white pants with blue stripes as their home uniform. As for the road one — it is completely white, with some navy-blue details. Both variants look fresh and bright on the field and make the team instantly recognizable during the game.