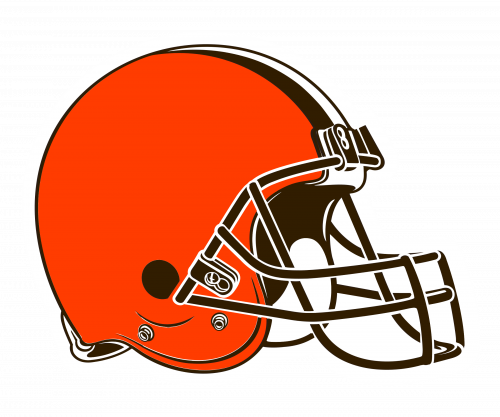 Cleveland Browns are the name of one of the professional rugby teams from the North Division of NFL, which was established in 1944 in Ohio. The peak of the team’s success was at the beginning of its history, and until today they are struggling to repeat it. The Cleveland Browns are property of Jimmy and Dee Haslam and have Kevin Stefanski as their head coach.

Probably the most interesting thing about the Cleveland Browns is that they don’t have any logo or emblem on their helmets since 1970. And they use this fact as their marketing strategy — employing the plain orange helmet as their official insignia. This unique visual identity approach makes the Browns one of the best-known rugby teams across the globe.

Before switching to the “no-logo” concept, the Cleveland Browns used a funny Elf, who got the name Brownie, as its main symbol. Brownie was first drawn in 1948 and featured a brown suit and the rounded crown of the same color. The elf was holding a brown football and looked happy, satisfied, and proud.

In 1959 the Brownie was redrawn. Now the suit was orange and the crown was re-placed by a new elf-hat, also in orange. His pants became black (on the previous version they were white) and now the elf was turned left (he was turned more to the right on the logo of 1948). The ball also changed its color to orange and now was from the other side of Brownie. This logo stayed with the team for ten years and was the last funny one before the plain helmet era started.

The first minimalist logo was designed in 1950 — it was a red helmet with the white thick grill. The helmet was placed in profile, oriented to the right. The black and white stripes could be barely seen in the middle of it. This emblem stayed with the team for 15 years.

In 1986 the helmet was redesigned into a more modern version. It was now in 3/4 turn and featured orange color. The grill got more massive and the stripes in the middle were more visible.

The redesign of 1992 was more about the helmet’s grill. It became white and more complicated, reflecting the protection and reliability. The team had to relocate to Baltimore and missed one year of playing in 1995, but after coming back, they kept using this logo for another ten years.

The grill became dark gray in 2006. This was actually the only change made to the official logo of the rugby team. Now the helmets started looking more solid and con-fident, evoking a sense of professionalism and power.

In 2015 the logo was redesigned again. This change was more about the color scheme — orange gained a more intense red shade, while the grill became black. The lines of the helmet and its grill were cleaned and modified, which gave a more modern look to the logo. As for the stripes in the middle, the gray one turned into a black one. 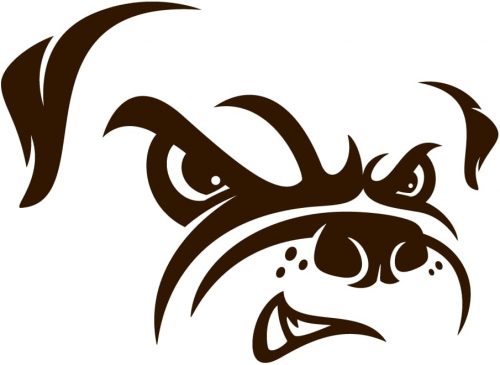 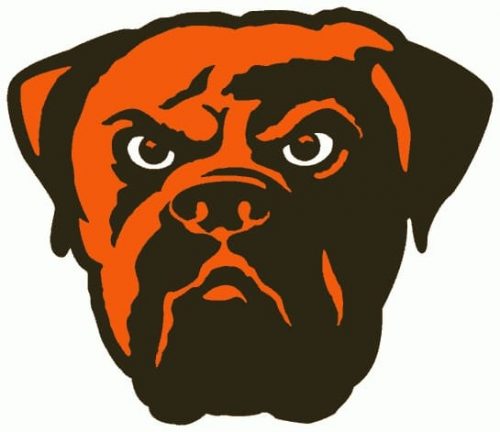 The symbol of the Cleveland Browns is the bulldog, executed in smooth black lines with a white grin. The animal’s image is usually placed on a dark orange background, the same as on the helmet, and was a “Dawg Pound” lettering under it. The inscription is executed in black and bold sans serif, which adds a sense of strength and fighting spirit. 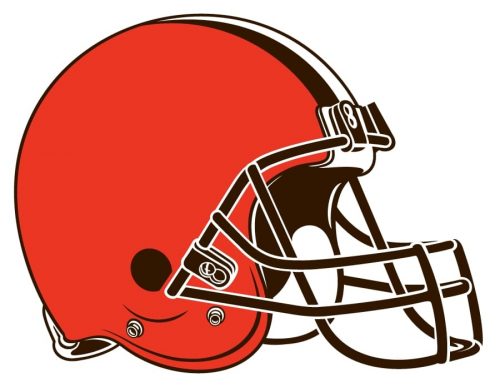 The helmet design of the Cleveland Browns is taken from their logo — it features intense orange color, a black grille, and three lines, coming through the middle — two black lines with a white in the center. 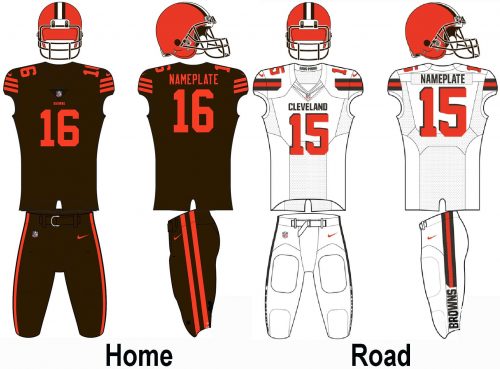 As their home uniform, the Browns choose black jersey with orange players number and black pants with two orange lines on the sides. For the road uniforms, they use a white and orange color combination — both jersey and pants are in the snow-white shade, with bold orange elements. It looks fresh and makes the team recognizable on the green rugby stadium.