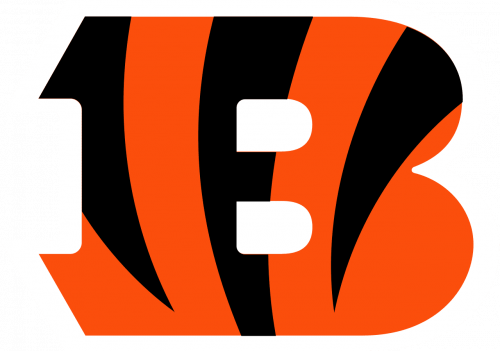 Cincinnati Bengals are a North Division of NFL rugby team, which was established in 1967 in Ohio. The main name of the history of the club is Paul Brown, who was the coach of Cleveland Browns. Today the team is owned by Mike Brown and has Zac Taylor as a head coach.

The only consistent part of the Cincinnati Bengals visual identity during its history has been the orange and black color palette, resembling of the tiger’s fur. All the designs were completely different in their structure and composition, besides the three helmet-shaped logos from the 1970s and 1980s.

The very first logo for the Ohio rugby team was designed in 1967 and depicted a Bengal tiger running with a white football. There was also a white helmet on the logo, left behind the running animal, symbolizing its speed and determination. The tiger was a perfect representative of the team’s character and way of playing, while the orange, black, and white color palette evokes a sense of professionalism, loyalty, and happiness. The logo stayed with the team for only two years.

In 1970 the team decides to completely change the visual identity concept. The new logo depicted an orange helmet with the black bold “Bengals” lettering on it. The wordmark was executed in a narrow sans-serif font with the letters in a thin white outline. It was a minimalist design, perfectly reflecting the essence of the team, while the original color palette made it recognizable.

In 1981 the inscription was removed from the helmet. Now the logo became even more minimalist, with the only decorative element — the tiger pattern. The small bold black grill was balancing the ornate helmet, adding a sense of protection and professionalism.

The redesign of 1987 brought the new shape of the helmet’s grill. It became larger but was now executed in thinner and more elegant lines. The shape of the helmet was also slightly modified, making it look more modern. It was the last version of the helmet-shaped logos for Cincinnati Bengals, which stayed with the team for ten years.

The new concept was brought to the Bengals’ visual identity in 1997. Now the team’s logo depicted the tiger’s head, which is turned slightly to the left. The animal looks dangerous and strong, which brilliantly reflects the character of the teams this logo can still be seen today, as the Bengals use it as their secondary emblem.

The current Cincinnati Bengals logo was designed in 2004. It is composed of a bright letter “B” executed in the orange and black color palette, resembling the tiger’s stripes. The letter “B” is drawn in a custom extra-bold font, with its serifs cut slightly diagonally. It is a minimalist year instantly recognizable logo, which looks modern and stylish. 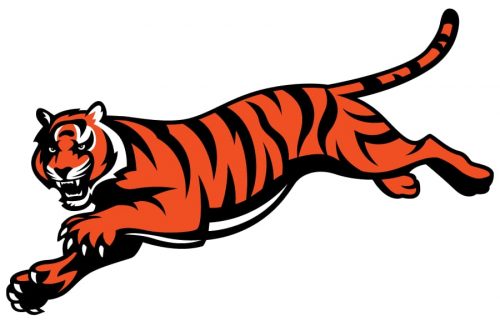 The Bengal tiger is the official symbol of the Ohio rugby team. This strong and brave animal has always been an essential part of the Cincinnati Bengals visual identity concept. 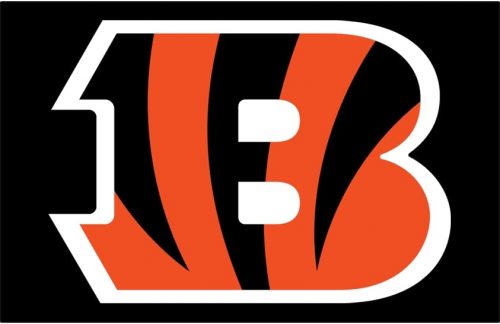 The emblem of the team is composed of the stylized letter “B”, which is usually placed on a black background. The white outline of the letter makes it look brighter and eye-catching, while the black shade adds power and professionalism to the whole look.

The emblem is sometimes accompanied by a wordmark, executed in a custom stylish font, which resembles the tiger’s claws, as has its serifs sharp and elongated. The inscription is executed in the same orange and black combination. 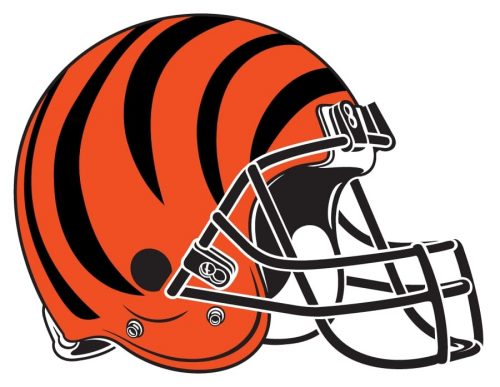 Cincinnati Bengals do no have their official logo on their helmets, they just use the design from the 1980s as an inspiration. The helmets of the team are executed in orange and have a black tiger-like pattern, with a black grill. It makes the team look instantly recognizable and memorable. 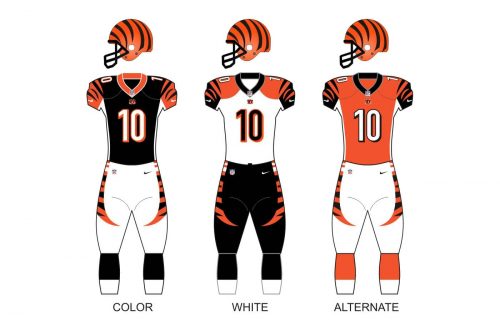 The uniform of the Bengals is also executed in their official color palette, black and orange jerseys are complemented by white pants with wide orange stripes on the sides.

To soften and balance the look of the road uniform, the team wears white jerseys with black and orange details, so that the helmet is the brightest part of the outfit. The black pants are decorated with orange side stripes.