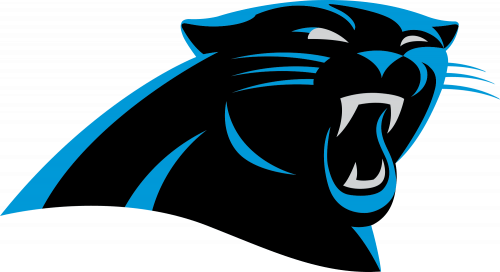 Carolina Panthers are a professional rugby team of the South Division of NFL, which was established in 1993 in Charlotte. Today the team is very well-known across the country, its owned by David Tepper and has Matt Rhule as the head coach.

Born in 1993, the Carolina Panthers are a young team, which has been very con-sistent in everything connected with their visual identity. The original logo, designed in 1995, has only been slightly modified in 2012, and this is one of the reasons the team’s symbol is instantly recognizable across the globe.

The logo from 1995 was composed of a panther’s face with its mouth opened and eyes reflecting danger and strength. The panther is placed in 3/4 and looks like giv-ing a warning to everyone. Executed in black with light gray, almost white details and a thick blue outline, it reflects professionalism and authority, along with power and willingness to win.

The contours and color palette of the iconic panther were slightly modified in 2012. The thin black outline from the previous version was removed, and the gray mustache of the animal are now colored blue. The lines became smoother and sleeker and the shape of the eyes and mouth are now more modern and strong. 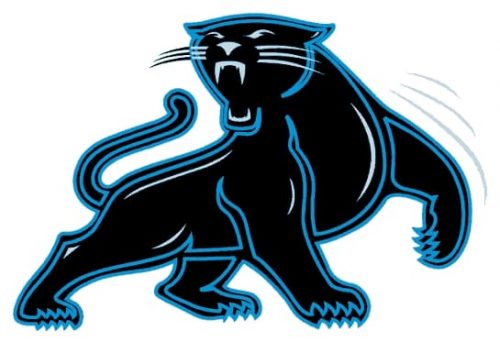 The black panther from the team’s logo has been with the Carolina Panthers since the very beginning. Executed in the dark and powerful color palette, it reflects the courage, danger, and dynamics of the young team, who are always ready to fight and win.

The silver-gray accents add a sense of expertise and loyalty, showing the team’s fans as a very important part of the Panthers’ philosophy. 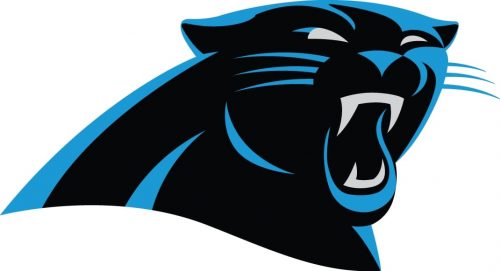 The black and blue panther’s face on the team’s emblem is accompanied by an electric blue wordmark, executed in a custom sans-serif with sharp lines in some of the letters. 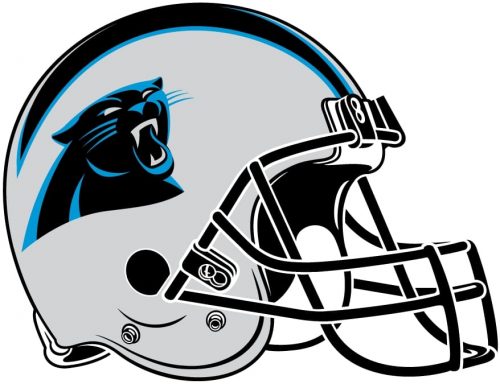 As well as the logo designs, the helmets’ style has also been changing only once, in 2012. The iconic black and blue panther is placed on a light gray background, which has three stripes in the middle — a thick black and thin blue on its sides. 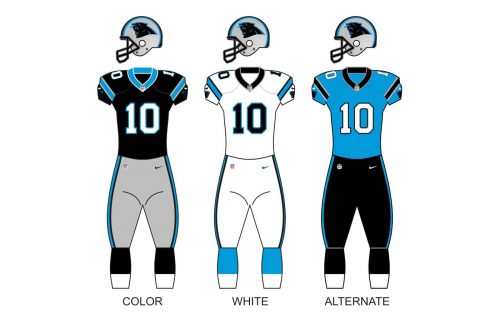 Unlike the logo and helmets design, the Carolina Panthers’ uniform was changed three times throughout the team’s history. The first two versions were executed in black, blue, and gray, but in 2012 the team decided to go more minimalist and today’s uniform is composed of a black jersey with white player’s number and blue details, and black pants with blue side stripes.

For the alternate uniform, the team wears a fright blue jersey with white numbers and black details, and the gray pants with blue stripes.

The road uniform of Carolina Panthers is composed of white jerseys and pants with blue details and dark bold numbers.